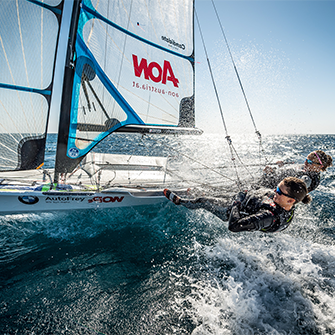 With only a couple of days to go, more than 700 crews, representing 58 nationalities, have registered to compete at this year’s Trofeo Princesa Sofia Mallorca Hempel World Cup Series. They will compete in ten classes: the women's ILCA 6, FX, IQ Foil Women and Formula Kite Women; the men's ILCA 7, 49er, IQ Foil Men and Formula Kite Men; and the mixed 470 and Nacra 17.

After a pause of two years, with the last get-together of these classes being the European Championships in Austria in 2020, next to the Olympics 2021, athletes, and sailing-fans alike, anticipate the regatta co-organised by the Club Nàutic S’Arenal, the Club Marítimo San Antonio de la Playa and the Real Club Náutico de Palma.

“It is great to see that many sailing teams in one spot again. Especially the large female presence is astonishing. This proves the relevance and inclusivity of this sport. We see this event as a great kick-off event for the Road to Paris and are excited to be there ourselves,” says Rainer Wilhelm, Global Sales Manager from Robline. Robline provides material to several individual teams, but is also partner of certain sailing federations such as the Norwegian, Swedish, Finnish, and Austrian Sailing Federation.

The Trofeo Princesa Sofía Mallorca will muster the world's best specialists, from April 1st to 9th 2022, across the earlier mentioned ten Olympic sailing disciplines, which are set to compete in Paris 2024!  It will also be the first competition in which 49er and 49er FX teams will use the new regulation equipment for Paris 2024. The incorporation of 3Di technology means an aesthetic change due to the black color of the material and a certain change in performance as some teams still do not have the new type of sail and some choose to use the previous version. Will there be performance differences? The new Formula Kite format is another addition to the Olympic Circus. Find the dates and locations below.